On May 18th it was my parents' birthdays. Yep, they were both born on the same day, but two years apart. Two years ago we celebrated my mum's 70th and last night we went out to a restaurant called Portofino in Hanley to celebrate dad's. My younger brother, David, unfortunately could not make it from Brighton, so it was just the five of us (dad, mum, Keith, me and my older brother Lee).

As we arrived half an hour ahead of time, we called into a pub acros the street called Fat Cats, for pre-dinner drinks. Seeing that they had a beer garden, and the weather being okay-ish, we decided to go outside and take a few photos. 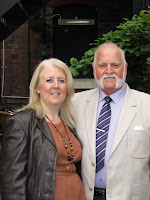 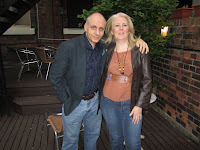 Portofino is a lovely restaurant, and I've been there a few times. Last time I was there was almost exactly a year ago, with Sue from Carlisle. She had come to visit while Keith was away in New York and I took here there while showing her the heady delights of Stoke!! They do a fixed price menu that varies from time to time. You get three courses plus coffee and all you pay is the price of the main course you choose. That menu is limited of course, but they have an a la carte menu too with some delicious dishes. I had smoked salmon with rocket to start, and a lovely salad of chargrilled chicken.

We demolished four bottles of wine between us! My dad was amused to see that the wine had his name, as you can see in the picture below!! 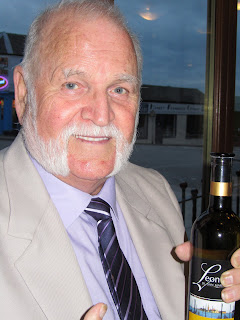 When it was time for dessert we all sang Happy Birthday to dad (and mum) as the waiter brought out a little mini cake with candles that I had arranged earlier. Dad was surprised and I hope not too embarrassed, as people from other tables were joining in too! 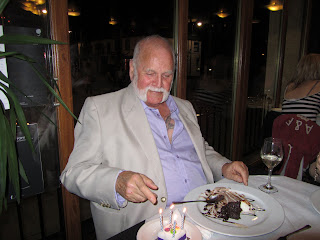 All in all, a lovely evening. And the best part? Dad picked up the bill!!! Thanks Dad! Looking forward to your 80th!!!
Posted by DebbiV at 14:59 8 comments: Links to this post

On Thursday I'm off to Carlisle to visit my friend Sue. It's been a long time since we got together and we're way overdue a bottle of Veuve! We bought it ages ago and will finally be drinking it on Saturday night.

On Friday we're off to Falkirk for the night to see tribute band NU2. We are both looking forward to that. It will be our last chance to see them as they are actually disbanded now and are just getting together this one time for a special gig to raise money for the Falkirk Football Academy.

Three weeks after I get back from Sue's I will be off to Santorini, a gorgeous Greek island, for two weeks. I have been visiting Greece for over 20 years and Santorini is the only place I have ever revisited. This will be my third time. The combination of pristine white buildings, narrow winding streets with sophisticated and eclectic shops, fabulous restaurants, dramatic volcanic landscape (complete with black sand beaches), and sunsets that people throng the streets in the main town to witness, makes Santorini a very special place and I can't wait to be back.

I'll be blogging about both trips, so check back soon.
Posted by DebbiV at 22:55 1 comment: Links to this post

It's been a few weeks since I blogged so I'm being a good girl and posting! Friday is a great night to do that as it's the day that all the stresses fall away. Where are the weeks going? Spring is here this weekend and with it the promise of a great summer.

I've got so much coming up. Four weeks from today I will be seeing the U2 tribute band NU2. They have been disbanded for a while but are coming back to do a final "farewell" gig as the last time they played no one knew that would be it so no one was able to give them a send off.

The gig is at Falkirk Stadium, and since the lead singer is a good friend of ours (me and Sue) we are going as his guest, which is great. I'm very excited to be seeing them. They are (were) the very best U2 tribute and it's criminal that they are no more.

Of course I'll be staying at Sue's a while up in Carlisle. I'm there from Thursday to Sunday. We have a bottle of our favourite champagne (Veuve Cliquot) to celebrate.

At the end of May I'm off to Santorini, a fabulously beautiful Greek island, for two weeks. This is to rest and relax totally in preparation for another round of U2 360 shows.

If you're celebrating, enjoy! I'll be saving my celebration until tomorrow when I'll open a bottle of wine and enjoy an end of week chill out.

Thanks to www.st-patricks-day.com for the following info all about St Patrick.

Many folk ask the question 'Why is the Shamrock the National Flower of Ireland?' The reason is that St. Patrick used it to explain the Holy Trinity to the pagans. Saint Patrick is believed to have been born in the late fourth century, and is often confused with Palladius, a bishop who was sent by Pope Celestine in 431 to be the first bishop to the Irish believers in Christ.

Saint Patrick was the patron saint and national apostle of Ireland who is credited with bringing christianity to Ireland. Most of what is known about him comes from his two works, the Confessio, a spiritual autobiography, and his Epistola, a denunciation of British mistreatment of Irish christians. Saint Patrick described himself as a "most humble-minded man, pouring forth a continuous paean of thanks to his Maker for having chosen him as the instrument whereby multitudes who had worshipped idols and unclean things had become the people of God."

Saint Patrick is most known for driving the snakes from Ireland. It is true there are no snakes in Ireland, but there probably never have been - the island was separated from the rest of the continent at the end of the Ice Age. As in many old pagan religions, serpent symbols were common and often worshipped. Driving the snakes from Ireland was probably symbolic of putting an end to that pagan practice. While not the first to bring christianity to Ireland, it is Patrick who is said to have encountered the Druids at Tara and abolished their pagan rites. The story holds that he converted the warrior chiefs and princes, baptizing them and thousands of their subjects in the "Holy Wells" that still bear this name.

There are several accounts of Saint Patrick's death. One says that Patrick died at Saul, Downpatrick, Ireland, on March 17, 460 A.D. His jawbone was preserved in a silver shrine and was often requested in times of childbirth, epileptic fits, and as a preservative against the "evil eye." Another account says that St. Patrick ended his days at Glastonbury, England and was buried there. The Chapel of St. Patrick still exists as part of Glastonbury Abbey. Today, many Catholic places of worship all around the world are named after St. Patrick, including cathedrals in New York and Dublin city

Why Saint Patrick's Day?
Saint Patrick's Day has come to be associated with everything Irish: anything green and gold, shamrocks and luck. Most importantly, to those who celebrate its intended meaning, St. Patrick's Day is a traditional day for spiritual renewal and offering prayers for missionaries worldwide.

So, why is it celebrated on March 17th? One theory is that that is the day that St. Patrick died. Since the holiday began in Ireland, it is believed that as the Irish spread out around the world, they took with them their history and celebrations. The biggest observance of all is, of course, in Ireland. With the exception of restaurants and pubs, almost all businesses close on March 17th. Being a religious holiday as well, many Irish attend mass, where March 17th is the traditional day for offering prayers for missionaries worldwide before the serious celebrating begins.

In American cities with a large Irish population, St. Patrick's Day is a very big deal. Big cities and small towns alike celebrate with parades, "wearing of the green," music and songs, Irish food and drink, and activities for kids such as crafts, coloring and games. Some communities even go so far as to dye rivers or streams green!

It's so good to get to the end of the working week, and I always feel like a Gladiator must when surviving the lions one more time!

It's always a mixed week; diversity in all things is a major part of my job.

We did our best - as a team of 15 - to become rich this week by having a go of the Euromillions. But, despite seeing two full rainbows in one afternoon and having 3 (yes 3!) black cats crossing my path on the way home from the supermarket last night, I remain a pauper along with my workmates.

Today, as a poor person, I'm having a lovely day. A bit of laziness, then some housework, and now homemade pannini pizzas, nachos and dips, and three Peruvian beers!

Hope you're all having a great one too!

It's Monday again. They come around quickly, and the weekends are getting shorter!

I had a great weekend though. It started with a chat with Sue on Skype, and a nice bottle of Sainsburys House Merlot. The very best way to start any weekend.

Yesterday I went for a run and took hubby Keith with me. The weather was glorious; sunny and crystal clear skies. However, it was bitterly cold and we had to run with gloves on, which seemed strange. My ears were so cold they were throbbing. I think I need ear muffs!!

Now another week starts and I have lots of plans. I'll continue working on my script. It's coming along nicely and is a welcome diversion from work.

Hope everyone has a great week. If you want, you can post here on my blog about what you have planned for this week. I'd love to hear.

For those who don't know of her, Sarah Millican is a brilliantly funny comedian with the most delightful Geordie accent. She's a woman who's lived life and been through things we all have, and she talks about them with candour and great humour.

I'm going to see her tomorrow night at a local theatre, so will write a review after.

Tonight I'm catching my breath after a busy day and looking forward to the weekend.

What is everyone doing this weekend? Answers please on my blog if possible and not the Facebook link (means your posts are visible to people who don't have Facebook).

Whatever you're doing, have a brilliant one!!
Posted by DebbiV at 18:32 3 comments: Links to this post 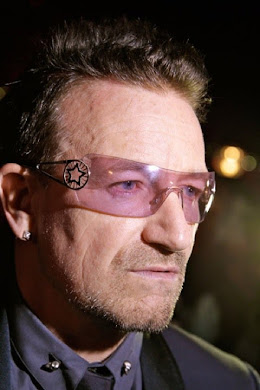 "The world is more malleable than you think and it's waiting for you to hammer it into shape." - Bono

Worth Checking on the Web!